Summer Ccr Diving: A Season on the Gorgona Wrecks

Our focus was on a couple of wrecks which were recently the subject of local and nationwide news, made newsworthy by their difficult logistics position and by their significance, both from the historical and from the diving accomplishment viewpoints.

Their being rather far offshore (15 miles), their depth (140 meters under the surface), the paucity of information available on the web and from local knowledgeable people all contribute to make them a widely looked-for diving site, and at the same time an interesting subject from the historical and sports side.

The two wrecks belong to the German steamers GEIERFELS and FREIENFELS, which sank after striking an Italian mine barrage not known to them. They were the first German merchant ships to be sunk in the Mediterranean in World War II.

A peculiar feature of the four ships was the so-called Maierform-type bow, which shows a rounded inward profile of the lower part of the cutwater.

On 10 Oct. 1932, while leaving Basra (Iraq) along the Shatt-el-Arab watercourse, GEIERFELS collided with the British tanker BRITISH VENTURE, 4,696 grt/1930, lying at anchor there, and she suffered bow damage.

At the outbreak of WW II she had sailed from Antwerp bound for India on 19 August 1939 under the command of captain H. Rathke. On 25 August the Reich Merchant Marine Ministry (Reichsverkehrministerium), aware of the approaching attack against Poland, transmitted to all German merchant shipping abroad the order to sail immediately from any harbour under British or French control and to look for the nearest friendly, or at best neutral, port.

GEIERFELS was in Genoa at the time, as per her sailing schedule. On 29 August she dropped anchor in Baia, Gulf of Naples, with a cargo including 106 tons of dynamite, which she intended to disembark on board lighters, delivering it to a local Regia Marina depot in the hope of selling it to them. But the Italian Navy showed no interest toward the purchase, and so the deal fell through.

The steamer was then laid up in Naples, where she remained inactive until, on 19 Oct. 1940, she was requisitioned by the Kriegsmarine for Operation "Felix", the proposed German occupation of Gibraltar (on 26 Oct. Hitler met with Generalissimo Franco at Hendaye, on the Franco-Spanish border, to try and reach an agreement to that effect, however with no useful outcome as we know).

Her sister-ship FREIENFELS, 7,454 grt, the second of the four steamers, under the command of captain H. Mueller, homeward bound from Karachi, on 25 August 1939 was bunkering in Malta. She sailed in all haste going to Bari, and thence on 4 September to Trieste, where on 5 Sept. she was laid up, moored together with several other German merchant ships which found themselves in the Mediterranean at the outbreak of war. FREIENFELS was also requisitioned by the Kriegsmarine on 22 Oct. 1940 with the same purpose.

On 19 December 1940, during the preliminary preparation to Operation "Felix", both ships, sailing together, end up on an Italian mine barrage off Leghorn, near Gorgona island, and sink.

Altogether, theirs was not a very lucky quartet.

Of the other two steamers, at the outbreak of WW II the fourth, UHENFELS, was homebound from Bandar Shahpur via Bombay, where she found herself on 25 August 1939, and whence she sailed in great haste, entering Lourenço Marques in neutral Mozambique to bunker there. But after learning that the local coal trade was in British hands, she was forced to take over most of the coal cargo from the HAPAG steamer DORTMUND (5,188 grt/1926), which had also looked for refuge at Lourenço Marques; the latter gave up any hope of leaving the port in favour of the larger and newer UHENFELS. After several aborted attempts, UHENFELS managed to leave port and to escape the Anglo-French offshore patrols in the night of 13 Oct. 1939. But shortly afterwards she was detected in the South Atlantic on 5 Nov. 1939 to the West of Freetown, Sierra Leone, by aircraft from the carrier ARK ROYAL, which was engaged in the hunt for ADMIRAL GRAF SPEE at the time, and captured by the destroyer HEREWARD, whose prize crew was able to board her and prevent an attempt by the German crew to scuttle the ship. She was brought to Freetown and taken in charge by the British MOWT (Ministry Of War Transport), renamed EMPIRE ABILITY, under the management of the Elder Dempster Lines. She would soon be torpedoed and sunk by U 69 on 27 June 1941 while in convoy to the SW of the Canary Islands.

Finally LICHTENFELS, the first built of the four ships, 7,457 grt, had sailed from Bombay on 15 Aug. 1939. At 25 Aug. she found herself in the Red Sea opposite Port Sudan, en route for Suez with insufficient coal and intending to bunker at Port Said. In the new international situation, she turned back and went into Massawa, where she joined several other German ships laid up in harbour. On 1 April 1941 she made a late attempt to leave harbour, but was forced to give up by the British naval blockade offshore. The crew , confronted with the imminent arrival of the British land forces, then set her on fire on 4 April. She was to be raised and broken up in situ by British concerns in 1950. 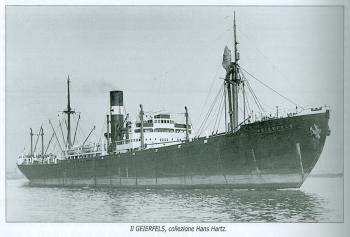 GEIERFELS, identified as such thanks to the ship's bell which we cleaned up on the wreck, lies on her port side to the NE of Gorgona Island, while FREIENFELS is about two miles away to the South. On the latter wreck, who lacks her bow section lying not very far away, we found the building yard's plate, which remains to be scraped off to show her construction number. Her outline and general look in any case make her easily identifiable.

Aboard GEIERFELS, strangely, the wooden decking is stll extant, being probably made up of some particularly strong kind of wood, since those ships sailed the Far Eastern route coming from Northern Europe - which perhaps also explains the presence of radiators to heat up the internal spaces. All the abovedeck fittings are still there. We suppose that the forecastle served as accomodation for the crew, since dishes, remains of berths and so on are visible through the access door.

The ship's bell is still located on the aft-facing handrail of the forecastle. All aft and forward holds are empty. The great derrick of 120 tons capacity , used to lift railroad locomotives and heavy machinery, is still standing on the deck complete with its rigging and blocks, torn off at the level of the sighting top.

On the midships superstructure only the first level is still joined to the hull, while the mess room and all the upper levels, bridge included, are incredibly still in one piece, and all lay together on the sea bottom beside the hull, as if the ship were in sailing condition, but rotated by 180 degrees. We suppose that the speed of the sinking, the impact with the sea bottom and the different strengths of the structure all contributed to create what seems a submerged castle built straight on the seabed.

The engine room and passenger quarters appear intact, the hatch cover is still there dangling over the void, smashed but with its windows almost whole. The bridge is a little sternwards, towards the derrick located between the two after holds. Many objects fell off and lay in the mud covering the decks of the several levels. On the bridge everything is still there, from the engine telegraph to the steering machinery, plus the navigation lights fallen down from the upper level where the open conning position was, with its secondary steering and auxiliary engine telegraph.

The wooden structures of the open conning position are missing, as is the light iron carpentry work which reinforced them. The wind scoops are still standing, as are the batteries of the underlying radio shack, whose whole apparatus fell on the seabed. The stern with the tiller and screw are not there, the mine blast took them clean away, leaving in their place a gash as large as the hull section. 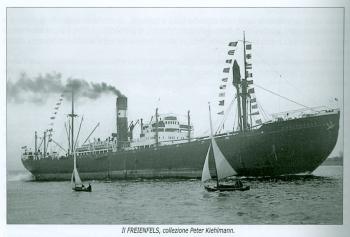 FREIENFELS lies about two miles Southward from GEIERFELS, in an upright stance. The mine blast tore the hull at the level of the first hold, the bow section lies about 200 meters from the rest of the wreck, the 120-ton derrick is still upright, shored up by the loading booms resting on the sea bottom. As in her sister-ship, all the holds are empty.

The midships structure is mainly intact, minus the wooden structures which disappeared long ago leaving only a few remains. The internal dividing bulkheads collapsed, taking with them everything connected to them. In the mess room at the deck level stacks of dishes and glasses emerge from the mud, together with ceramic water kettles and heating fittings. On the first deck we find a common hygiene room with still whole sinks and objects of all kinds such as fans, a locked case, a whole block of cutlery and other tableware. On the side a private bathroom with a bathtub. On the second deck the radio shack with all its hardware, hardly recognisable were it not for the insulators and cables hanging everywhere.

At the upper level we find the bridge, again with its whole equipment, but the decks above and below it have almost disappeared, being made of wood. Above the bridge there is the open steering position, on a corner a battery box to feed the radio transmitter in an emergency.

Externally, most fittings appear intact: the several derricks, the small davits of the lifeboats are all outward pointing, the funnel lies collapsed on its side, as does the engine room hatch cover, torn away by the upcoming air bubble during the sinking, leaving open the upper part of the engine.

The passenger quarter is intact. Access to the various cabins is easy, as is that to operating spaces. The after holds are empty, while the midships derrick collapsed across the deck.

The hull is cracked in part, probably by the impact with the sea bottom. The two side derricks at the stern still stand. Strangely, tiller and screw lie totally under the mud. The sea bottom in fact is at -137 meters, while inside the last hold we are at are over -141 meters, plus the bilge keel. That must have been a very a strong impact to make the hull sink so deep into the mud, even if the hull rupture is at the extreme bow.

There are no comments to display.